At the beginning of May, we drove the couple of hours up to Kansas to visit my brother and sister-in-law. Only a few places were open with the shut-down still being in place.

We decided to make a trip to their local Atwoods for some beef jerky my brother insisted we had to try. And since we’re huge fans of beef jerky, we were excited to check it out!

While we were there we came across their baby chicks. My youngest has been BEGGING for chickens for a while, but we had held off. Until my hubby SAW the chicks. Yes, it was he who fell in love and decided we HAD to have them!

He immediately started looking up all things chickens. Raising them, feeding them, entertaining them (it turns out they get bored, too!), and building them a chicken coop. It was quite funny listening to him as he excitedly explained to me everything he’d learned.

We returned to Atwoods the next day and purchased the chicks on our way home. We decided on six, two for each kid, and chose different colors so they could tell them apart.

The kids, who weren’t with us on the trip, were so excited when they came home from Grandma’s to find their baby chicks! My youngest has since been dubbed the “Chicken-Whisperer” as he carries them around and they easily come to him.

They lived in our living room in a plastic tub with a heat lamp and a small food and water feeder for the first several weeks we had them. We couldn’t believe how fast they grew!

Eric immediately started on the chicken coop so it would be ready when they were old enough. He found the plans on Pinterest and you can find the same chicken coop plans here!

Take a Tour of Our Chicken Coop!

He started by building the base. The kids and I helped paint so he could continue to build. We used Barn and Fence Paint since it’s formulated for outdoor use. It went together pretty fast!

There were different variations of the coop as far as color and materials used. We decided to paint it white and use cedar shake shingles to give it a farmhouse-style feel.

The chirping was really starting to drive me nuts so they spent the last two weeks in the garage before they were ready to go into the coop. It was a good transition as we were able to get rid of the heat lamp and allow them to adjust to the temperatures.

While the coop was being built, we started to take the chicks outside each day to roam and peck and get used to the outdoors. They loved their outdoor time!

The day finally came when it was time for them to go out to the chicken coop. You know they’re ready when they’ve developed feathers and lost their fuzz. It took some time for them to figure out how to get up inside at night to sleep, but after about a week they had figured it out.

Chickens don’t like to be in complete darkness so we added a solar light over the window. They all fight for that spot! It’s quite entertaining to watch!

Eric decided they needed a little more room so he added on a run and a little swing (did you know chickens like to swing?!) to entertain them.

Did you know chickens pant like dogs do? We purchased a vintage watering can from an antique mill for the coop, but with the heat, they were going through it in no time.

Eric got a 5-gallon plastic bucket, painted it white, and added little nozzles that squirt out water when they push it with their beaks. They had it figured out in no time!

He built a feeder out of PVC pipe for their food. They will also free-range, but we will supplement with organic feed. They were too short currently to reach the food, so he stacked some bricks for them to be able to climb up until they’re fully grown.

They should start producing eggs this fall and we can’t wait! Eric used painting trays in the nesting spots so that when they lay an egg, it will roll down to the bottom and allow easy access without disturbing the chickens. He lined it with carpet so the eggs don’t crack.

The coop plans included a small raised garden area for herbs, etc. Chickens like certain herbs like lavender, which has a calming effect as it does for humans, and parsley, sage, oregano, and more. We planted a few herbs in the garden for them to enjoy!

Each evening we let them out of the coop to free-range and they love roaming around the yard. They are a herd animal and always want to be close to each other. When one starts to head back to the coop, they all follow.

It’s been fascinating to start this new adventure and so much fun for our kids! It’s also teaching them responsibility as they help clean out the coop, add new bedding, refill food and water, and take care of their chickens.

Thanks so much for hanging out with me today! For more about our home, be sure to visit me on Instagram! I’d love for you to stop by and say hi! 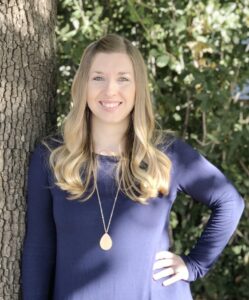